As revealed in the local press, Tice's Meadow is for sale. We've been advised to not say anything beyond this statement for now.

The Estate Agent's details can be read here.

If you'd like to sponsor us, please get in touch, either by email, Twitter, Facebook or in person. Feel free to sponsor us on a “per bird” basis, or for an overall amount. In 2017 we saw 80 species and raised over £750. Your support is very much appreciated! 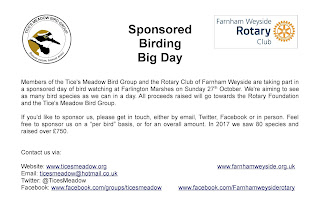 Grasshopper Warbler is the 136th species of bird recorded on site this year. This is the 6th record for site, the last being on 26/08/18.

Dartford Warbler is the 137th species of bird recorded on site this year. This is the 10th record for site, the last being 14/11/18.

Spotted Flycatcher is the 138th species of bird recorded on site this year. This is the 10th record for site, the last being on 09/09/17.

A Daubenton's Bat was inadvertently caught in the mist nets and safely released unharmed.

Colin Varndell: Spotted Flycatcher (assumed to be same bird as 17th as in same trees).

A massive thanks to Roger Dickey, Andrew Bray & Mark Cutts, who ringed on site over the past 2.5 days. They ringed 86 birds, including 8 retraps, including Grasshopper Warbler (6th for site) & Redstart (8th for site) - both new for 2019.

Dave Baker: Grasshopper Warbler (assumed to be the same bird as 18th & 19th).

We were happy to spend this afternoon supporting the Badshot Lea Kiln Open Day, as part of National Heritage Open Day.

A big thank you to Stu from the Blackwater Valley Countryside Partnership for mowing the Wheatear Field today in not very favourable weather.

We had a very productive meeting with PCSO Platt from the Waverley Safer Neighbourhood Team today at Tice's Meadow. Now that Surrey Police have agreed Tice's Meadow is in Surrey, we are pleased to announce that Waverley Beat (Surrey Police) will be conducting sporadic patrols on site.
We will also be displaying police issue posters, and working on other initiatives to reduce anti-social behaviour on site.

This is the 19th sighting of Arctic Tern on site, but the 5th this year.

The rangers and volunteers from the Blackwater Valley Countryside Partnership did a great job clearing vegetation from along the river north of Pegasus Bridge today as part of Blackwater River Week.

Our public moth trapping session was a great success this evening. We trapped 33 moths, of 19 species, with 3 new for site:

Twenty-one volunteers did sterling work clearing the river as part of the Blackwater River Festival this morning. It was great to see some new faces joining in. Great work by all involved.