We are delighted to announce that today the Mayor of Farnham notified us that Richard Horton (our chairman, founder and leader) will be receiving a prestigious "Services to Farnham Award".

Services to Farnham Awards are awarded annually to people who provide an outstanding or crucial service to the community or the people of Farnham. Nominations are considered and approved by a full town council meeting. The awards’ medals are kindly sponsored by Sir Ray Tindle of the Tindle News Group.

Richard will be receiving his award and medal from the Mayor of Farnham at a civic function at the end of February.

More about the Services to Farnham Awards here.

The full text of Richard's nomination:

"Richard Horton is a true local hero and deserves recognition for his continued commitment to ensuring that the local community are engaged with the natural environment on their doorstep.

Richard is the Chairman, founder and leader of the Tice's Meadow Bird Group – a group of local volunteers who are committed to managing and improving the Tice's Meadow Nature Reserve on the edge of Badshot Lea.

Richard is the friendly face of Tice's Meadow – as happy leading a group from the local Rotary Club around the site as he is a local school or scout party.

Richard is the knowledgable nature enthusiast – always willing to share his knowledge and experience with other members of the group and the wider public.

Richard is the glue that binds our group together – membership continues to grow as local residents are drawn to the relaxed, welcoming and friendly atmosphere he encourages on site.

Richard is at the centre of all our work – liaising with the site's owners (Hanson), Surrey County Council, local community groups, the Blackwater Valley Countryside Partnership, utility companies and contractors to ensure that the group's objectives and the needs of the wildlife on site are considered at all times.

Richard has been involved with Tice's Meadow since the early 1980s, before the site became a sand and gravel quarry, and was latterly restored to a nature reserve. Firstly as a local resident who enjoyed walking his dog on site. Then as a bird watcher who started to recognise the potential of the site as a nature reserve once quarrying was complete. And finally as the founder and chairman of the Tice's Meadow Bird Group, leading a group of enthusiastic volunteers who all care deeply for the nature reserve.

Richard was heavily involved in lobbying for the site's restoration plan to be significantly amended, to include provision for the nationally important and threatened habitats of wet meadow and reed beds. Richard also secured the retention of a publicly accessible viewing mound, when it's future was under threat.

Richard was also involved in the site gaining Site of Nature Conservation Interest status – recognition by Surrey County Council of the importance of the assemblage of bird species, and other wildlife, found on site.

The annual Tice's Meadow BioBlitz – organised by Richard and held over a bank-holiday weekend each Spring – is now considered a highlight of the year for many Surrey conservationists and regularly attracts over 100 members of the public to the site to enjoy bird ringing demonstrations, guided birdwatching walks and talks, pond-dipping, bat detecting walks, moth trapping, small mammal trapping and the ever popular socialising in the evenings.

Tice's Meadow, thanks in a large part to Richard's efforts, is now widely considered the best place to watch birds in Surrey and one of the friendliest nature reserves in the country.

An impressive 190 species of bird, and 1,075 species overall, have been recorded at Tice's Meadow – a testament to the work of the Tice's Meadow Bird Group under Richard's leadership.

Simon Elson (Surrey County Council's Principal Environmental Enhancement Officer) has described Tice's Meadow as a “flagship site” and “a role model for others to follow”, in part due to Richard's tireless leadership and achievements.

In addition to his work at Tice's Meadow, Richard is also committed to working within the wider community, especially with regards to connecting locals to the wildlife on their doorstep. Richard regularly leads public walks for the Surrey Bird Club at Crooksbury Common and is also involved with the conservation activities of the Badshot Lea Community Association. Richard also sits on the board of the Badshot Lea Kiln Village Hall, and is also committed to the activities of the Blackwater Valley Countryside Trust, ensuring that Tice's Meadow is now considered a “must visit” location in the wider Blackwater Valley." 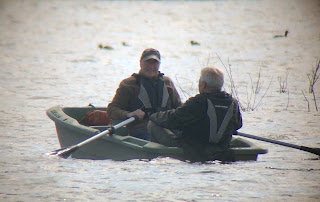 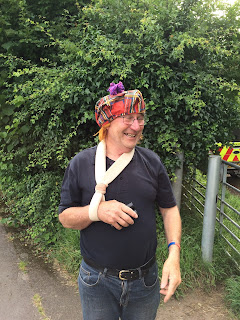 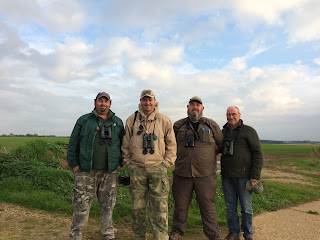 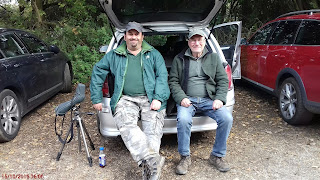 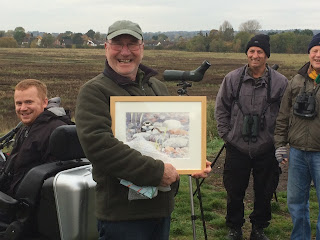 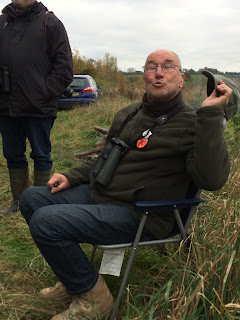 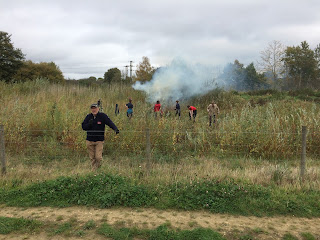 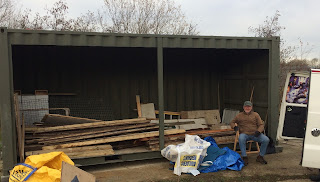 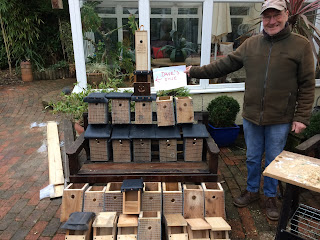 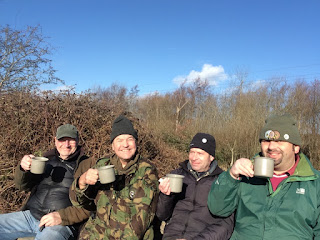 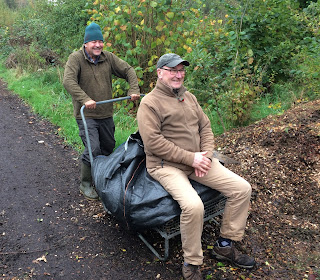 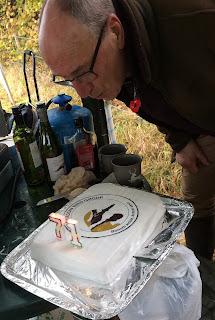 One of our cows got stuck in a hole today, but thanks to Murray Nurse (who called me to alert us) the cow was quickly rescued by farmer Gibby, who has "rewarded" Murray with a gallon of his homemade cider! If you do have any concerns about the cattle on site, please let one of the Tice's Meadow Bird Group know asap.

In addition, Mark Elsoffer reported 13 Wigeon, 22 Teal, 3 Shoveler and a Goldcrest this afternoon.

John Hunt reported a Green Sandpiper, 194 Lapwing, 25 Wigeon, 2 Stonechat, 50+ Redwing, a Kestrel, a Buzzard and a Red Kite this morning.

An dog walker managed to let his Husky into the meadow this afternoon, where it proceeded to harass and chase the cattle - we have some heavily pregnant cows. Richard Horton saw off the Husky, checked the cattle were ok and called the tenant farmer. If anyone sees people in the meadow who shouldn’t be there, or dogs in the meadow, please let us know ASAP. Please also call the police on 101.

7 volunteers met at the Plant Yard this morning and salvaged a large amount of wood that had been dumped by the travellers, removed all the screws and transported it to Richard Horton's house ready for use on site. Thank you Mark, Richard H, Jim, Len, Oli, Andy and Trevor.

In addition, Andy and Jim spent the day cutting and burning willow in the reed beds - well done guys.

In addition, Richard Horton reported a Firecrest this afternoon.

In addition, Steve Minhinnick reported a Jack Snipe this afternoon.

In addition, John Hunt reported a Water Rail and a Grey Wagtail this morning.

In addition, Peter Brown reported a Goldcrest this afternoon

Mark Elsoffer reported a Nuthatch, 3 Siskin, 8 Redwing, 4 Fieldfare, 2 Stonechat, a Goldcrest, a Bullfinch, a Kestrel and a Buzzard this morning.

We are delighted to announce that the Tice's Meadow Bird Group will be taking part in the Farnham "Otter Wey" community project in 2018.

Businesses and community groups in Farnham are being asked to decorate and name a 1m high ceramic model otter, which will then be displayed along an art trail through Farnham town centre in conjunction with the Farnham Walking Festival (May to June 2018).

Similar projects have been successfully run in Surrey over recent years, including the Surrey Hills Cow Parade and Hazelmere Hogs.

Otters have been chose as Surrey Wildlife Trust has recently found evidence that otters are returning to the River Wey and they are using the otter to promote their work on river conservation and restoration. They will be running conservation projects and events alongside the Otter Wey project, which we hope to also be involved with.

The project is being run by Blooming Art, in association with Farnham Town Council, Farnham in Bloom, Surrey Wildlife Trust and the Farnham Lions Club.

The completed otters be auctioned at the end of the project, with all proceeds going to 2 local charities chosen by the Mayor of Farnham.


Our participation in the Otter Wey project will help raise awareness of our nature reserve amongst Farnham residents and help us build links with the local community.

We shall be taking delivery of our otter from the Mayor of Farnham very soon.

If you would like to help with the decoration of our otter, or know someone artistic who may be able to assist, please get in touch.

More details on the Otter Wey project can be found here:
http://www.farnhambusinessconnections.com/the-otter-wey
https://www.facebook.com/otterweytrail/

A gallery of decorated otters from a similar project in Dartmoor can be found here:
http://www.moorotters.co.uk/catalogue/ 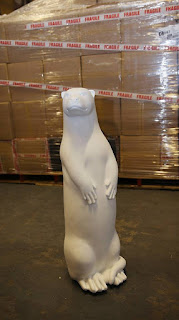 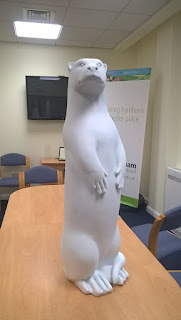 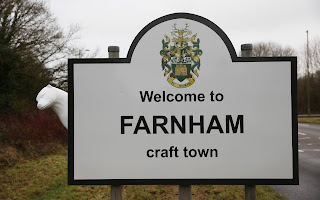 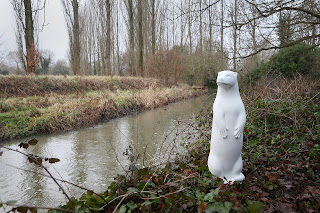