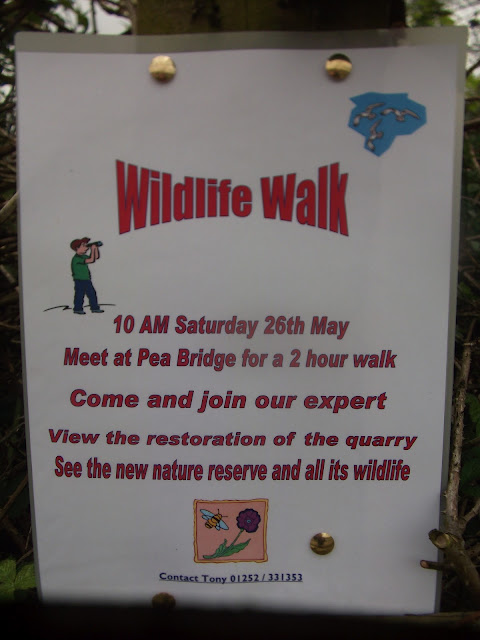 Twenty-six peple met local expert Richarh Horton on Pea bridge on a fine sunny morning. We set off to view the meadow. As we arrivied we just missed a flyover Hobby as it passed over the tree where the local Great-spotted Woodpeckers nest. Walking along the footpath that runs parallel with the mead﻿ow we could here are first Blackcap of the day   http://www.youtube.com/watch?v=f_OifN1vXTQ   As we continued along the path a few male Orange Tip butterflies were seen. Reaching a gap in the hedge we viewed the flooded meadow for the first time. Due to the rainfall in the past two months it is nearly at winter levels, normally it would be dry at this time of year. The Wood Sandpiper ( 5th record) found earlier in the morning was still present along with a Ringed Plover. Further along the path a recently fledged Great Tit was found in the middle of the path. It was moved safely off the path  Moving on towards the viewing bank which overlooks the meadow, slit ponda and the workings a Chiffchaff was heard singing. During the restoration the water was pumped out of the working for health and safety reasons. Thankfully again after the recent rainfall the water level can now be seen from the viewing bank. Only another 15ft to go before it's full!! Along the recent created fenced path we stopped to view the Newt Pool. Several Newts were seen coming to the surface to gulp a quick breath of air.  Then a Grass Snake was spotted on the edge of the pool. 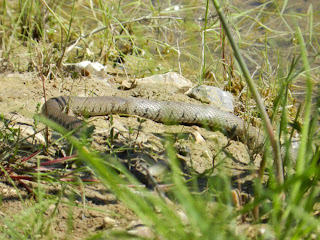 Grass Snake - Tices Meadow   © Sarah Sayer
It realised we were watching and quickly dissappeared. Also a male Broad bodied Chaser was seen on the edge of the pool. The first recorded this year. 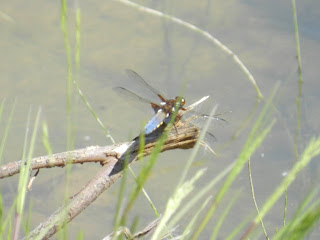 Back on the main path we followed the route of of the proposed re-route (marked by red posts) of the River Blackwater. Thie re-route will help alleviate possible flooding of the estate.
On the return route to Pea Bridge we heard and saw a Common Whitethroat singing from the top of a tree.
A great couple of hours of woldlife watching. Thankyou to Richard for leading the walk and the 26 participants for joining him.
Posted by Tice's Meadow Bird Group at 5/26/2012 12:00:00 pm

Red Kites are getting commoner over Tices Meadow as they spread further afield after the re-introduction program in the Chilterns during the early 1990's http://www.redkites.net/ 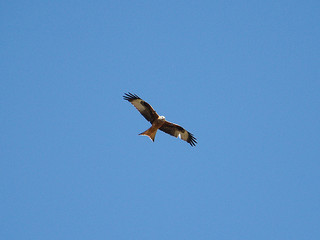 Red Kite (photo by Pickersgill Reef)
Today one drifted over the bank, workings and continued over the A31.

The 3 Greenshank still remain feeding on the meadow for the third day. Whilst the Common Sandpiper is feeding around  the 'Bike Pool', A Hobby was seen high over the workings, (JSH)

Greenshank for the second day

Orange Tip on the wing...


With below average tempertures and dull conditions it is not the best year for Butterflies. But today there were at least three male Orange Tip Butterflies on the wing. 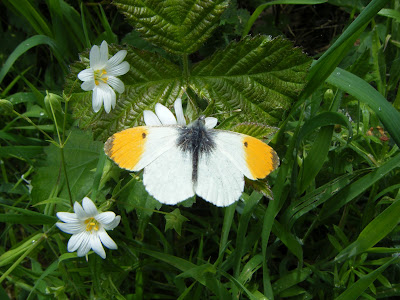 A Greenshank was found today feeding in the meadow. (RTH) 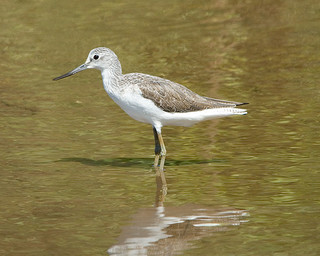 GREENSHANK (Photo by Sergey Yeliseev)
May 15th is the most popular day to find Greenshank at Tices Meadow. It has been seen in four of the last seven years on this date.
Posted by Tice's Meadow Bird Group at 5/15/2012 03:58:00 pm