We are proud to have won "Patch of the Year" in Neil Randon's annual Randon's Ramblings Awards. Read all about the awards and all the winners on Neil's excellent blog.

Ray has once again been hard at work, this time cutting back the bramble around the Dragonfly Pond. The Community Payback team have also been clearing the river by Pea Bridge.

The pink marks you may see on trees in the woods are indicators for tree thinning that will be undertaken soon to allow a proper understory to develop in the woods.

Today we held a social gathering to wish a Merry Christmas to all of our volunteers and supporters, and celebrate the official opening of our new shelter. We were delighted to have the shelter opened by Alan Wynde of Farnham Weyside Rotary Club, who have generously supported the project.

We also conducted the first official Snipe survey of the Meadow today. Transects were walked dragging a 25m long rope, with 21 Snipe counted, thanks to the help of Roger Dickey and Mark Cutts. This survey will be repeated monthly each winter and records submitted to the BTO.

Some excellent aerial views of site thanks to Kyle Russell.

Please note: the flying of drones on site is not allowed, unless with the express permission of the landowner Hanson.

We finished the year with a site list of 135 species. This is the lowest total since 2013 - initial thoughts are that this low count reflects national trends and is not indicative of the state of the habitats on site. 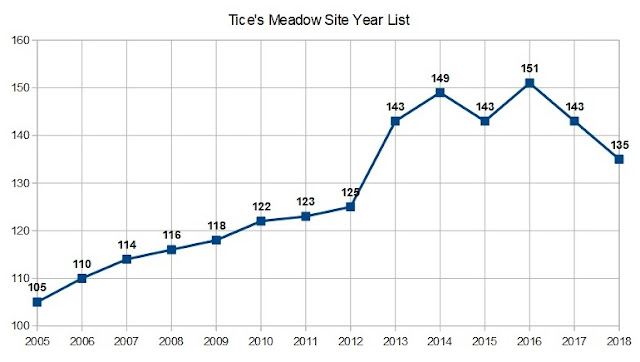 If accepted, this would be only the 3rd recorded sighting of Red-crested Pochard on site.

The count of 46 Collared Dove is a new site record.

The Hampshire Community Payback team continue to do a great job clearing the River Blackwater near Pea Bridge. They plan to put some logs and other features back in when finished, and will litter pick the whole stretch.