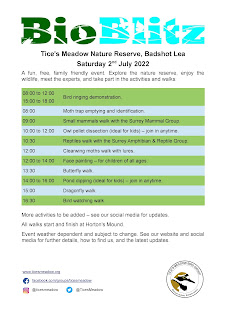 Mark Elsoffer: 3 Little Ringed Plover, 2 Little Egret, Mediterranean Gull & 30 Swift.
We had the pleasure of leading a walk for 30 members of 101st Church Crookham Beavers this evening. They completed a scavenger hunt, got to meet two PCSOs, saw some screaming swifts, and found a young Grass Snake.

We had a great day at the Hampton Estate's Open Farm Sunday today, running a bird ringing demo, showing off last night's moths, and providing information about our nature reserve to around 2,000 members of the public.

Mark Elsoffer: 2 Little Ringed Plover, 8 Lapwing & 2 Cetti's Warbler.
Two young Swifts were seen looking out of a nest hole on the Swift Tower today.
We had the pleasure of showing 21 members of 12th Farnham Cubs around site this evening.

Richard Seargent: Swan Goose (escape).
We were honoured to host the Army Ornithological Society as part of their AGM weekend this morning.