Happy New Year to all our blog visitors and friends of Tice's Meadow.

2016 has been another amazing year at Tice's Meadow. A full review of the year will be published soon in our forthcoming 2016 Annual Report. For now, here's a brief look at the year in numbers:

Late news was received on December 27th from a local dog walker of a Barn Owl hunting in the north-west corner of the Meadow "2-3 weeks ago".

Barn Owl is the 152nd species recorded on site this year. This is the first recorded sighting of Barn Owl on site since October 28th 2014.

In addition, Richard Horton reported a Little Egret and a Goshawk today.

A dog walker informed Kev Campbell that they had seen an Otter swimming across the Plant Yard lake - if confirmed, this would be a first sighting for the site and a really exciting development.

Bernard Baverstock from the Surrey Mammals Group joined Richard Horton for an Otter hunt this morning. Unfortunately, no definitive signs of Otter were found.

Merry Christmas and Happy New Year to all our blog visitors and friends of Tice's Meadow.

Our 2017 calendar has now sold out. Thank you to everyone who bought one - your continued support of Tice's Meadow is most welcome.

We've long suspected we have Badgers on site, but not had any hard proof of the fact. A dog walker reported seeing a "possible" Badger in the Meadow in May 2015, and a probable latrine was found later that month. Several dead Badgers have also been seen on the A31 running along the southern boundary of the site.

In the week before Christmas, Richard Horton noticed a mound of freshly dug earth and a newly excavated animal hole. A number of smaller excavations were also found nearby. A juvenile Badger's skull was then found in the spoil, along with alot of Badger hair.

Richard Horton reported a Green Sandpiper, a Blackcap and a Kingfisher today.

Carey Lodge reported a Common Sandpiper, some Siskin and a Chiffchaff this morning.

The count of 150 Herring Gull is a new site record count.

Richard Seargent reported a Common Sandpiper, 2 Green Sandpiper, 26 Snipe, 70 Golden Plover (flocks of 22 and 48) and a Brent Goose (flew out of the Workings and east down the valley) this morning.

This is only the 4th recorded sighting of Brent Goose on site.

Mark Elsoffer reported 2 Stonechat, 40 Siskin, a Sparrowhawk, a Kestrel and a Peregrine today.

7 youths were removed from the Reedbed today, asked to stop vandalising the safety notices and replace the lifebelts they'd removed. If you see anyone trespassing on site, please call 101. The Reedbeds and Workings can be especially dangerous due to quicksand and deep/cold water.

Hanson's fencing contractor was installing extra barbed wire fencing along the A31 today.

An Environment Agency operative was working in the River Blackwater clearing the vegetation by Pea Bridge today.

Ray was also clearing vegetation from the River Blackwater along the northern boundary of the site - sterling work as usual Ray!

Dave Baker reported a Water Rail (in the Silt Pond), 225+ Lapwing and 32 Fieldfare (roosting in the Reedbed) this afternoon.

A group of friends of Tice's Meadow met at the Kingfisher pub for a Christmas meal this afternoon - a good time was had by all.

Richard Seargent reported 15 Siskin, a Chiffchaff and a Peregrine today.

The count of 63 Shoveler is a new site record count. 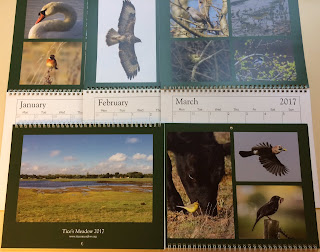