The Tice's Meadow Bird Group are holding our annual Spring BioBlitz over the weekend of April 29th to May 1st.

Some of the regulars will be camping on site all weekend. A programme of birdwatching walks, bat detecting, small mammal trapping, moth trapping and bird-ringing demonstrations has been scheduled for the weekend. All are welcome to join us.

Please see attached images for further details. We hope to see you there! 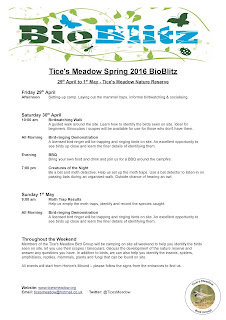 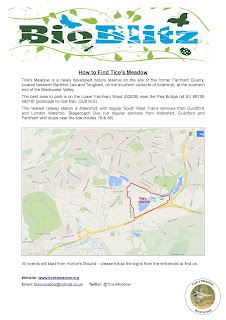 We now have a Flickr Group for photos taken at Tice's Meadow:

If you use Flickr and take photos at Tice's Meadow, please feel free to join the group and share the photos with us. If you're not a Flickr user you can still check out all the photos in the group.

Alex Potts, a photographer at the Badshot Lea Kiln Studio, recently got in touch and sent us these excellent photos taken on site last July.

Alex also sent us some great landscape photos taken on site in December 2015.

Richard Seargent reported a Green Sandpiper, a Common Sandpiper, 5 Snipe and a Little Egret this morning.

Dave Baker took this photo of Blackthorn in blossom - a consequence of the unseasonably mild weather we've seen this winter.

Richard Seargent reported 4 Snipe, a Jack Snipe and a Peregrine this morning.

In addition, Murray Nurse reported a Kingfisher, a Blackcap (female) and a small flock of Redwing today.

On August 27th Mark Elsoffer estimated a total of at least 1,000 Canada Geese on site. Mark took a series of photos of the geese on site and when bored over Christmas stitched them together and counted an exact total of 1,303 Canada Geese - a new site record count.

Edit: This is the largest flock of Canada Geese ever recorded in Surrey.

In addition, a visiting birder reported 3 Green Sandpiper in the Works this afternoon.

Two yobs riding dirt bikes were kicked off site today.  The police were called and turned-up for a quick drive around the area to see if they could see them. If you see anyone on motorbikes on site, or anyone else acting anti-socially or comitting any other crimes, please call 101 to report them.

In addition, Richard Seargent reported a Common Sandpiper and a Kingfisher this morning.

The count of 23 Mute Swan is a new site record count.