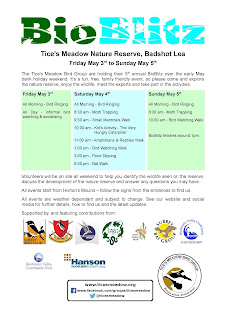 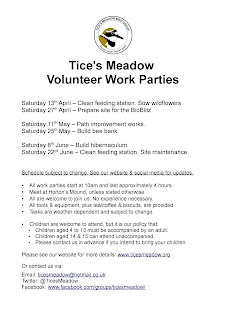 Arctic Tern is the 108th species of bird recorded on site this year.

Whitethroat is the 109th species of bird recorded on site this year.

Five volunteers cannibalised a mismatched marquee frame and roof, and some old panels from a 3rd marquee, that were all useless, and ended up with a 4m x 4m dining shelter for the BioBlitz. Richard also finished building a new Kestrel nest box.

Eleven volunteers met this morning for a work party. We cleaned the feeding station, sowed native wildflowers around site and put up 2 Tawny Owl boxes and a Kestrel box.

Dave Baker reported a colour ringed Black-headed Gull "WN(29L9)" - ringed in the nest on 08/06/14 at Hosehill Lakes, Berks, by TG Ball. This is the first sighting since it was ringed.

Brent Goose is the 112th species of bird recorded on site this year.

The first mallard chicks have fledged - a female was reported with 11 young.

Ten pairs of Canada Geese are on nests.

The mallard family are down to 8 young.

Massive thanks to PC Landscapes for lending us Anthony George and a rotavator to rotavate the Bells Piece Wildflower Meadow - great support from a local company.

Sedge Warbler is the 115th species of bird recorded on site this year.

Whimbrel is the 116th species of bird recorded on site this year.

Bar-tailed Godwit is the 117th species of bird recorded on site this year.