Our 2018 Annual Report is now on sale. £15 for a full colour, glossy, 140 page A4 report. All profits will be spent on our work at Tice's Meadow Nature Reserve.


You can collect in person from Richard Horton, or we can post it to you (+ £2 p&p). Please message or email us to place an order. 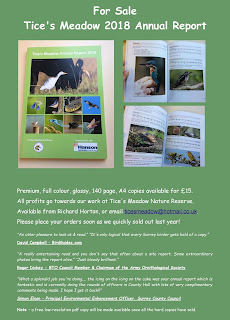 Once again, breakfast was brought to the waiting female Kestrel this morning. Though for the first time, she ate it in the box. Lunch was also eaten in the box.

The female Kestrel spent most of the morning in the nest box calling to the male and rubbing in the sawdust (making a nest?). 3 prey items were brought back later in the day. 1 taken in the box, 1 on the perch & 1 outside.


Thanks to Oli, our Swift Tower is now un-baffled and playing recorded Swift calls morning & evening.

The male Kestrel brought 3 meals to the box today for his mate.

Breakfast was delivered to the female again this morning as she spent over 3 hours in the nest box.

3 Kestrel food passes recorded today, and the female is finally roosting in the nest box for the first time!

Yellow Wagtail is the 107th bird species recorded in 2020.

3 prey items brought back by the male Kestrel today, although only 1 taken on camera. No roosting in the box tonight.


The female Kestrel roosted in the nest box again this evening.