The feedback we receive will be used to plan our future priorities and support our applications for grants to fund future projects.

We'd be grateful if you could spend 5 minutes to let us have your views. 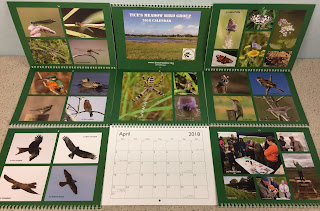 The Blackwater Valley Countryside Partnership held their annual Christmas Volunteer Work Party & BBQ at Tice's Meadow today. 40 volunteers, including all of the BVCP's staff and the BVCT Tuesday Volunteer Group spent the morning cutting and burning willow in the Reed Beds. Vegetation was also cleared from the River Blackwater, and the sites of the forthcoming new bridges were also cleared.

Catering was provided by the BVCP's staff, with a BBQ, jacket potatoes cooked in the fire, cakes and Mrs Elsoffer's famous mince pies.

A write-up can be found here on the BVCP's website.

Thank you to the BVCP and all of the volunteers for your support and hard work in 2017.

In addition, Richard Horton reported a Jack Snipe this morning.

In addition, Peter Casselton reported a Firecrest this morning.

This is only the 4th reported sighting of Firecrest on site, but the 2nd this winter.

In addition, Murray Nurse reported a Water Rail and 2 Bullfinch this afternoon.

This is only the 5th reported sighting of Firecrest on site, but the 3rd this winter.