Our volunteer work party schedule for the next 4 months.

Please do come and join us if you're free - a great way to spend a morning, helping nature, working with the local community, and having some fun at the same time. 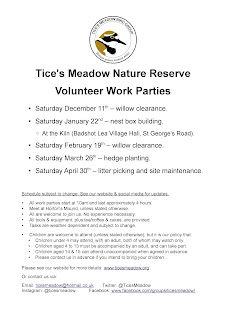 Richard Seargent: Green Sandpiper.
David Glew: 3 Siskin.
Thanks to the 7 volunteers who spent all day cutting out parts for 80 nest boxes. 50 are for the pupils of
Badshot Lea Village Infants School, 20 for Aldershot Park residential areas, & 10 for site.

Mark Elsoffer: Green Sandpiper, 5 Snipe, Little Egret & Goldeneye.
Thank you to the 12 volunteers who helped salvage the nest boxes from our flooded Sand Martin bank this morning. The first step in our project to build a second, higher, nesting bank.

Richard Seargent: Green Sandpiper, Water Rail, Little Egret, Kingfisher, Stonechat, Cetti's Warbler & Peregrine.
Licensed bat surveyors surveyed the flooded Bat Cave today. Sadly, no bats were found, although a small shoal of perch was a surprise.
A huge thank you to the 34 volunteers who spent 4.5 hours today building 80 nest boxes for the local community. As well as the 80 tit boxes we built this morning, we also started building 20 Swift nest boxes for Farnham residents that will be put up by the Farnham Biodiversity Group.

Colin Varndell: Little Egret.
A huge thank you to the 11 volunteers who worked so hard today on projects at the Kiln. We made a great start on building our new Sand Martin bank. Great work everyone. Our volunteers also finished the 20 Swift boxes that the Farnham Biodiversity Partnership will be putting up on Farnham residents’ homes. Painted black inside, & with pre-feathered nesting cups. Let’s hope the Swifts find them on their return from Africa in May.

Mark Elsoffer: Stonechat & Peregrine.
Colin Varndell: Nuthatch.
Thanks to the 6 volunteers who spent 5 hours today building our new Sand Martin bank at the Kiln. One more session next Thursday and we should be ready to install it on site.
Great to meet our MP Jeremy Hunt on site today. Good to hear he’s working on a submission to the Surrey Hills AONB boundary review that includes Tice’s Meadow.