Volunteers at Tice's Meadow Nature Reserve in Badshot Lea are celebrating having won a prestigious international conservation award and a cheque for €10,000.

The Quarry Life Awards are a biennial competition run by Heidelberg Cement which showcases the best conservation, research and community projects conducted in their quarries around the world. Heidelberg Cement are the parent company of Hanson UK – the operators of the former Farnham Quarry in Badshot Lea, which has now been restored to a flourishing community nature reserve.

The Badshot Lea based volunteers beat off competition from 100 community groups and university research projects from 25 countries across the world, in the “Connecting Quarries and Communities” section of the competition. 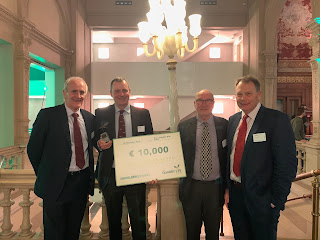 The volunteers' winning project was the Tice's Meadow Biodiversity Trail – a 1.5 mile long circular self-guided walk around the site, taking in a cross-section of habitats and conservation projects, to provide for both visitors to site and the site's wildlife. The project saw the volunteers raise and invest over £10,000 in site infrastructure in 2018.

The volunteers sourced and installed 16 waymarker posts, 6 benches, entrance signage, a site map, a community noticeboard and 6 interpretation panels along the trail route, educating and engaging visitors with the site's wildlife and history, whilst providing a waymarked route with places to stop and enjoy the site.

A Woodland Bird Feeding Station was built by the volunteers to provide vital supplementary food for the birds, whilst allowing visitors to sit and watch them at close quarters without causing disturbance. Another new addition to site was the innovative Swift Tower, with nesting spaces for 11 pairs of endangered Swifts, sited in the meadow on an 8m tall telegraph pole donated and erected by Scottish & Southern Electricity Networks.

The project was a real community effort: pupils from Badshot Lea Village Infants School displayed their artwork along the trail, bug hotels were built by cub scouts from 2nd Aldershot and 5th Farnborough, Duke of Edinburgh Award students from Badshot Lea helped build a hibernacula for hibernating reptiles, and residents and staff from Bells Piece Farnham cultivated a wild-flower meadow.

The project was funded with generous seed funding from Hanson, which attracted further grants from the National Lottery's Big Lottery Fund and the Surrey Bird Club. Logistical support and donations of materials were gratefully received from SSE Networks, P.C. Landscapes and Advanced Tree Services.

"The Tice's Meadow Biodiversity Trail makes it possible for anyone to learn about nature and get closer to wildlife while going for a walk around one of our former quarries,” said Martin Crow, National Sustainability Manager at Hanson UK. “It hosts an abundance of habitats and is considered to be one of the best inland sites to watch birds in South East England. It is testament to what quarry restoration can achieve in terms of connecting with local communities as well as educating and raising awareness about wildlife and ecology.”

Tice's Meadow Bird Group Chairman Richard Horton said “the Biodiversity Trail has been a massive success, with increased numbers of visitors to site, increased visitor satisfaction recorded, more new habitats created for the site's wildlife and a welcome increase in the recording and reporting of site biodiversity. We believe we have succeeded in our mission of connecting the quarry with the local community, and crucially we have also attracted a number of new volunteers to our group”.

"We are so grateful to Hanson and Heidelberg Cement for inviting us to enter the Quarry Life Awards, and for recognising our volunteers' efforts with a generous award. I'd also like to thank the National Lottery players who have helped fund this project through their playing of the National Lottery. And finally, this project would never have happened without the sterling efforts of our volunteers who have achieved a massive amount of good work over the past year."

More exciting plans are afoot at Tice's Meadow in 2019. Hanson will be building a much anticipated waterside birdwatching hide, and the volunteers plan to build an artificial Sand Martin nesting bank as well as resurfacing one of the key paths into the site.
Posted by Tice's Meadow Bird Group at 12/17/2018 02:38:00 am