Dave Baker visited in the morning and reported a Marbled White Butterfly in the Meadow and a number of Beautiful Demoiselles along the River Blackwater.

John Hunt reported 2 Green Sandpiper, 10 Little Ringed Plover, 20+ Lapwing, 8 Common Tern chicks and 2 Black-headed Gull chicks in the Meadow and Workings first thing. One of the Little Ringed Plovers was a juvenile - presumably a migrant. A Kingfisher was also seen - only the 4th record this year, compared to 9 in the same period last year.

A Common Sandpiper was reported via the Surrey Bird Club News service.

Richard Seargent showed the 5th Farnborough (Cranes) Cub Pack around the site this evening. Finding a female Slow Worm and a male Grass Snake were the highlights of their visit. A Gatekeeper Butterfly and good numbers of Emerald Damselflies were also noted.

Richard Seargent received this great painting he had commissioned of the Wryneck that was found on site in April, by artist Nick Derry. 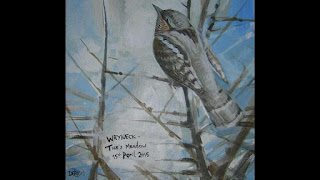