After some internet research this beetle was identified as a Golden-bloomed Grey Longhorn Beetle (Agapanthia villosoviridescens)  A pair mating were seen on a Hogweed leaf near the 'Dragonfly Pool'
In the research it has been mostly reported above the Thames Valley and to the east. 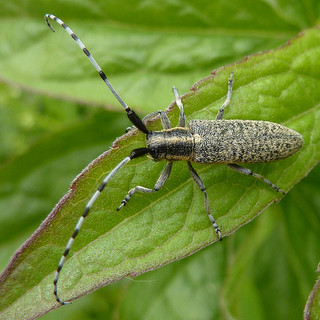 Repoted to the national recorder of Longhorn Beetles Dr.Rejzek (Martin.Rejzek[AT]jic.ac.uk)
His reply was "Agapanthia villosoviridescens seems to be expanding its range in the UK. I am getting increasing numbers of records from outside its traditional strongholds in East Anglia".
It also looks like it is the first time reported in the Blackwater Valley.